Last year, the team at CITL looked into the state of binary hardening features in IoT firmware.

Since then we’ve added more vendors and refreshed our analytic techniques. This post will catch you up on the latest findings and developments.

We built a corpus by collecting firmware updates published by vendors on their websites. To analyze this corpus, we wrote a pipeline to extract any Linux root filesystems we could find in the images. Filesystems in hand, the pipeline then fed every binary it could find into our analytic toolset.

You may have seen us present our initial findings on this corpus at HushCon (Seattle 2018) or ShmooCon 2019 (video link). This post updates and expands those findings.

CITL identified a number of important takeaways from this study:

Note: Not all firmware images were able to be tagged with a release date so any time-series or time based analysis we show will be a subset of the total data.

In our corpus, Ubiquiti and Asus had the largest number of firmware releases followed by DD-WRT and D-link. 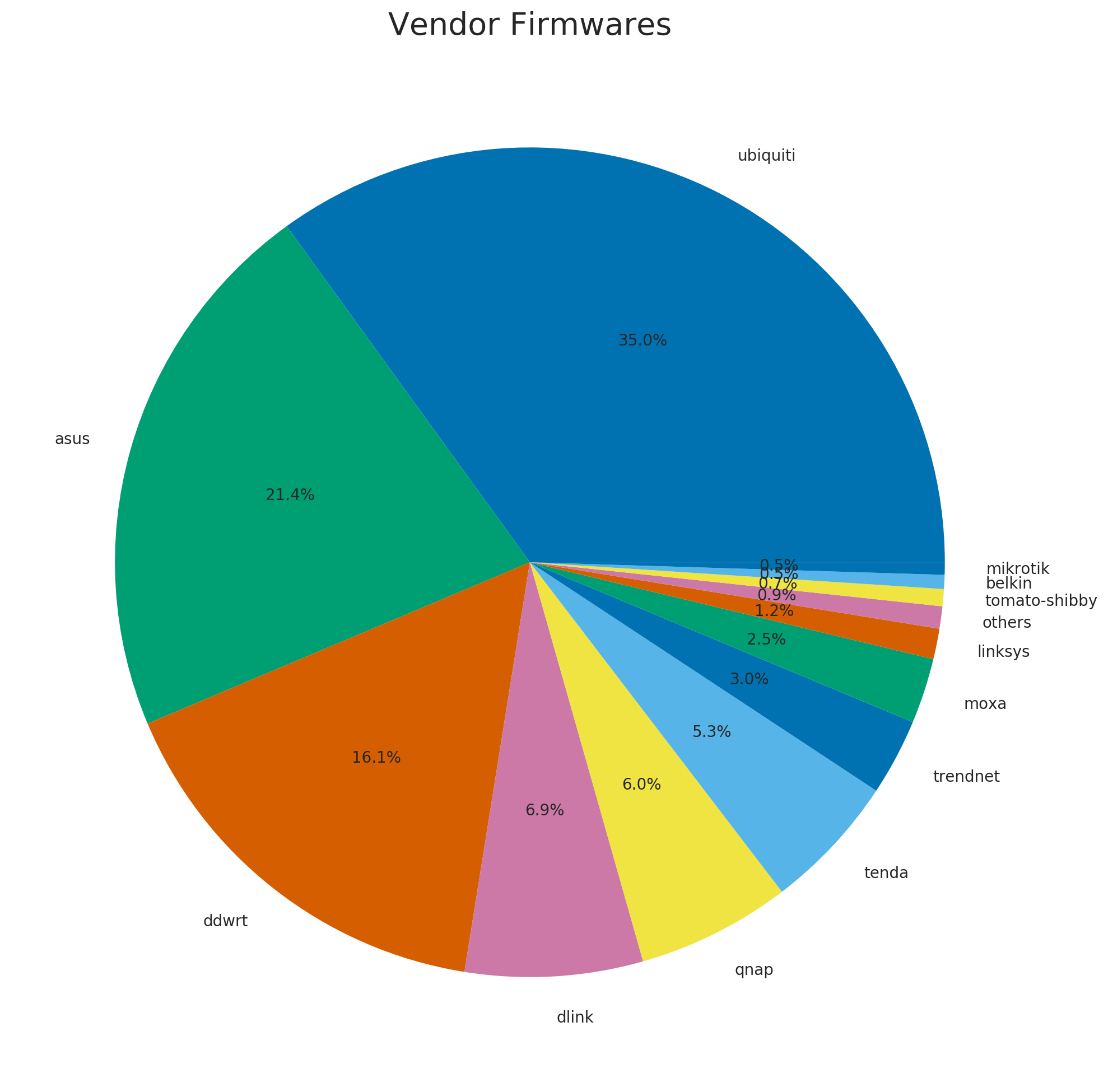 Vendor binary counts were slightly different, with Synology holding the largest share of binaries in the corpus. 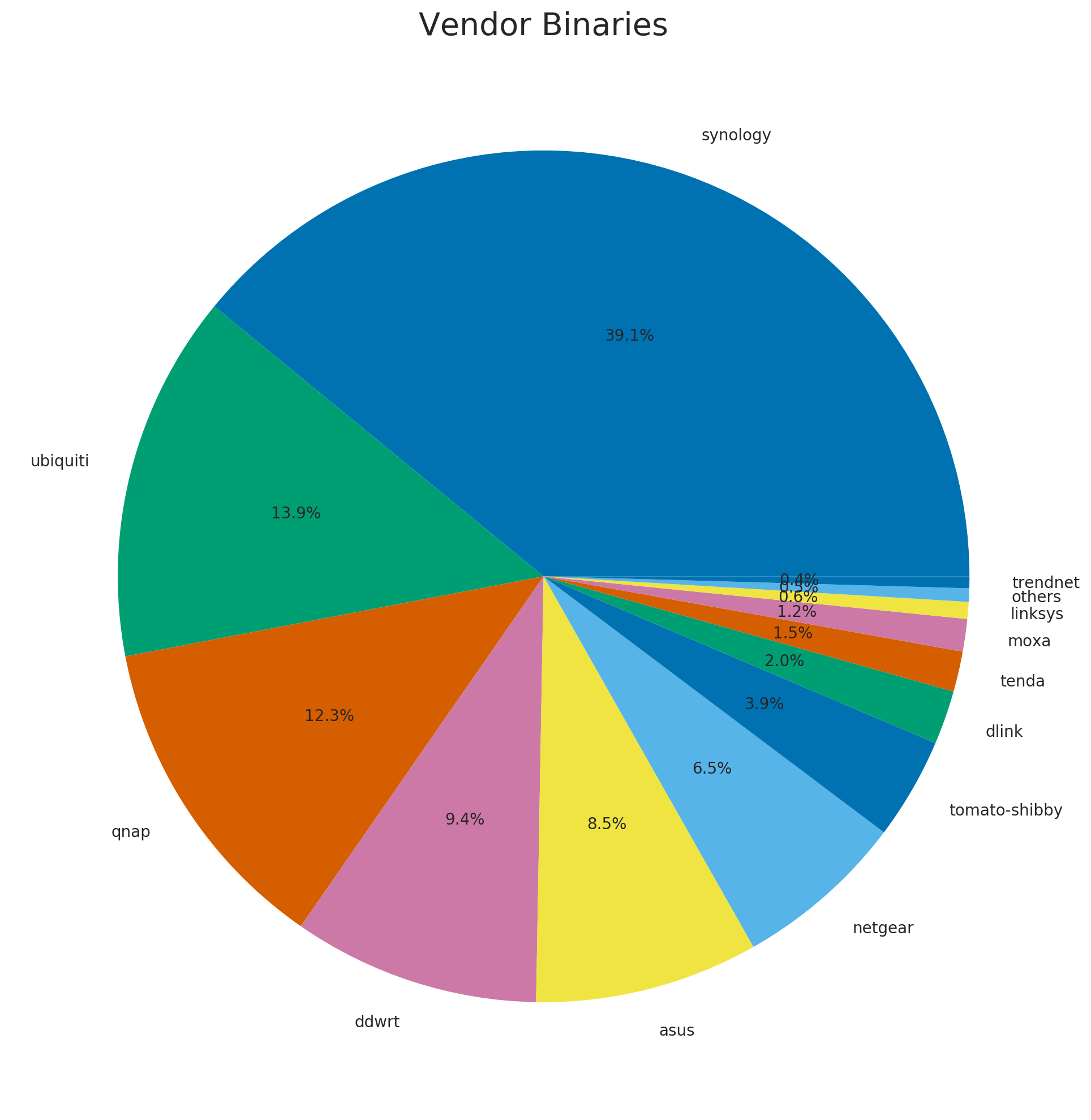 Surprisingly, for all the talk about ARM, MIPS is still an extremely popular architecture. At least within our corpus, MIPS beats out ARM even well into 2018 as being the most common CPU architecture. 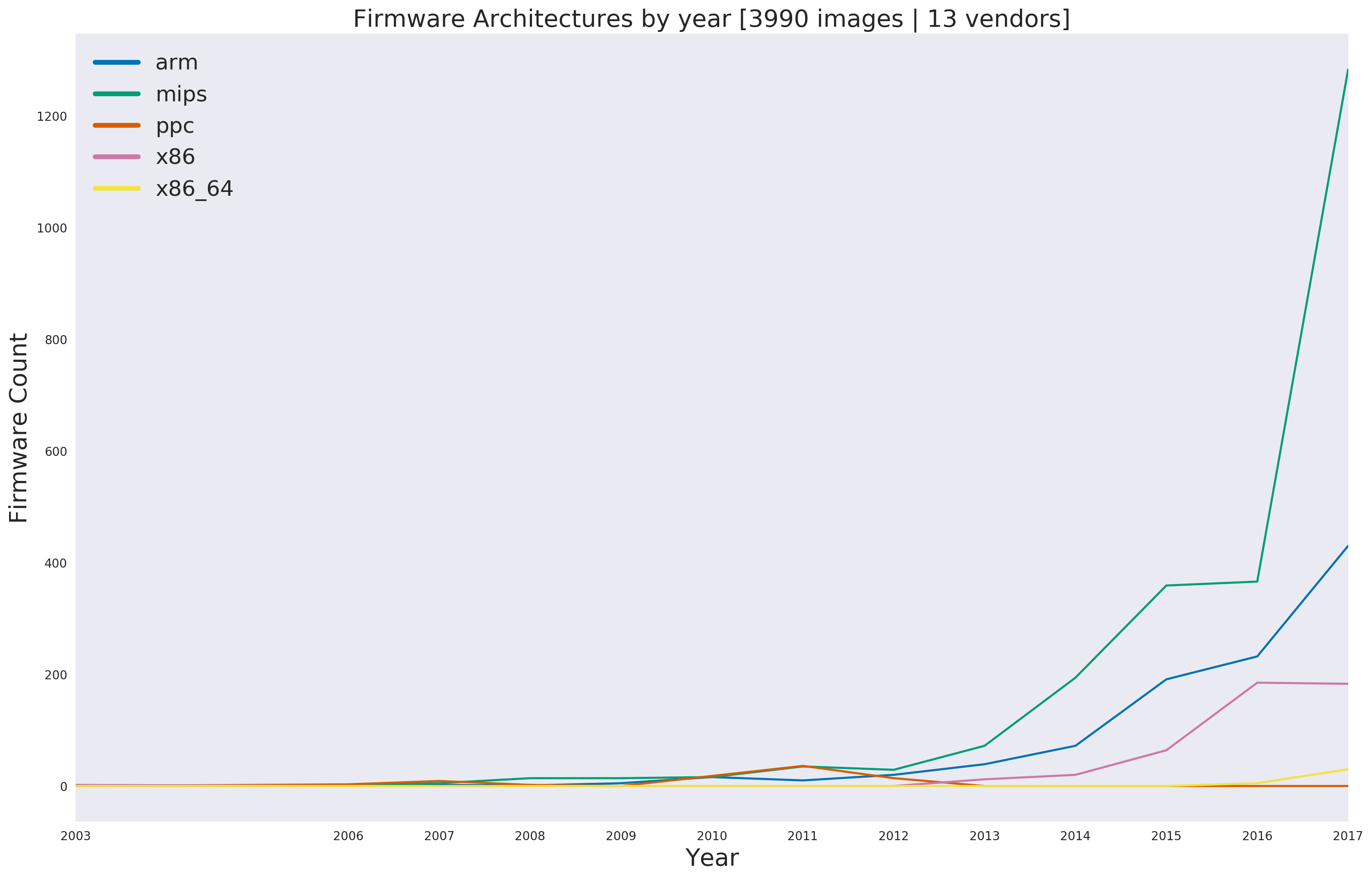 At CITL we use a aggregate score to normalize all the different hardening features a binary can have. This score is on a 0 - 100 range and can be thought of as ‘out of all possible features how many did a binary enable?’. It also takes into account the prevalence of riskier functions like system(), strcpy() and other common poor hygiene indicator functions. A higher score means the binary has more hardening features enabled and thus higher scores are better. 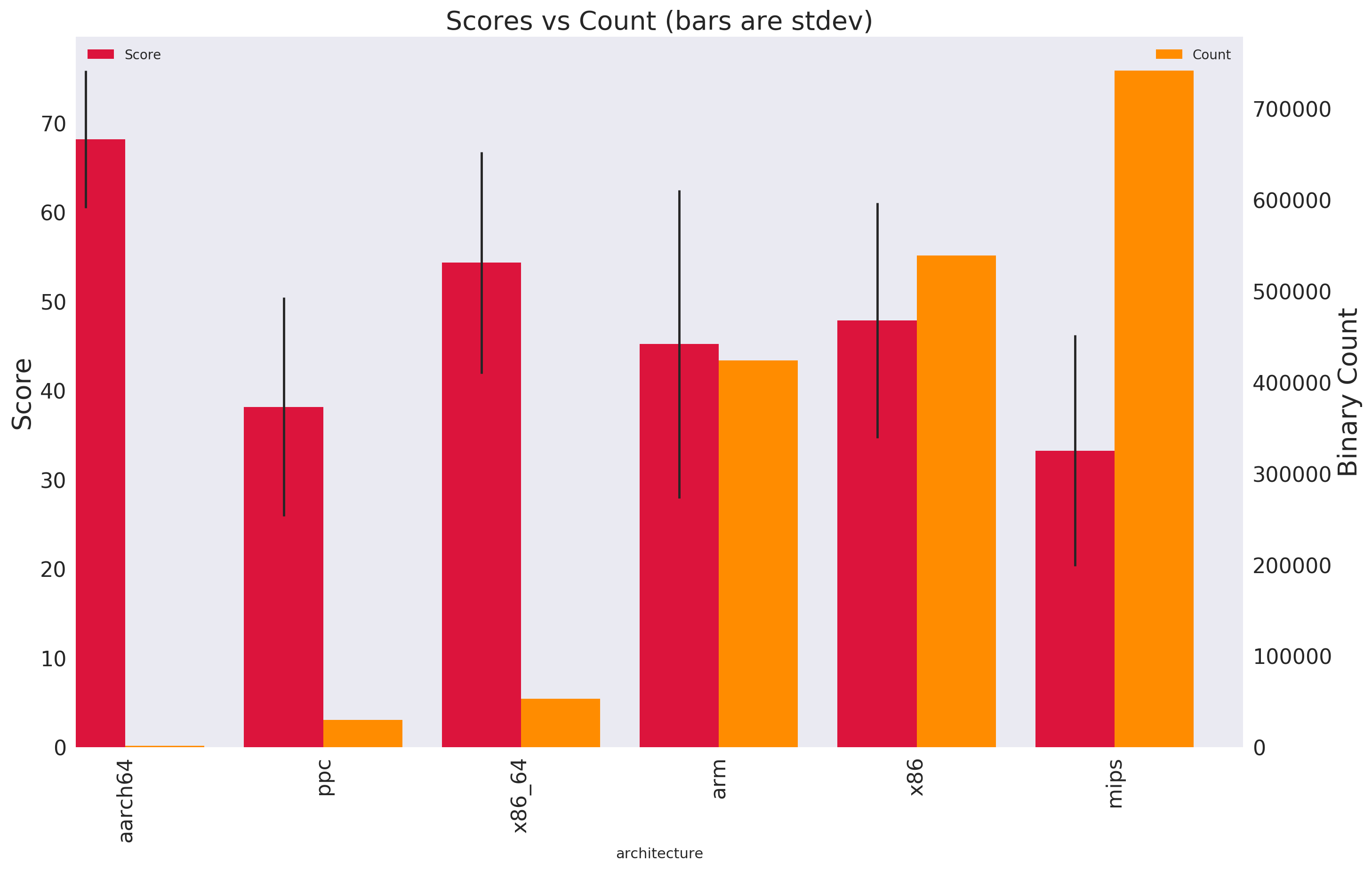 To better understand how vendors have evolved their practices over time, we selected two years (2012 and 2018) that both saw a large number of releases by different vendors. How do the big-picture numbers vary between these two years?

Let’s compare. The following tables shows the degree to which different vendors applied different build-hardening features in the given years. Each row represents a different vendor, with each column indicating the percentage of binaries shipped by that vendor with the given feature.

The following table summarizes the changes from 2012 to 2018. Looking at the changes between the two years a few things stand out:

We were very interested in measuring how updating a single product can effect the coverage of hardening features.

In order to do this, we took the difference in hardening coverage between the first release and the last release of a firmware and compare their changes. A histogram of the deltas can be seen below. As can be seen, for most products the change in score was approximately 0. 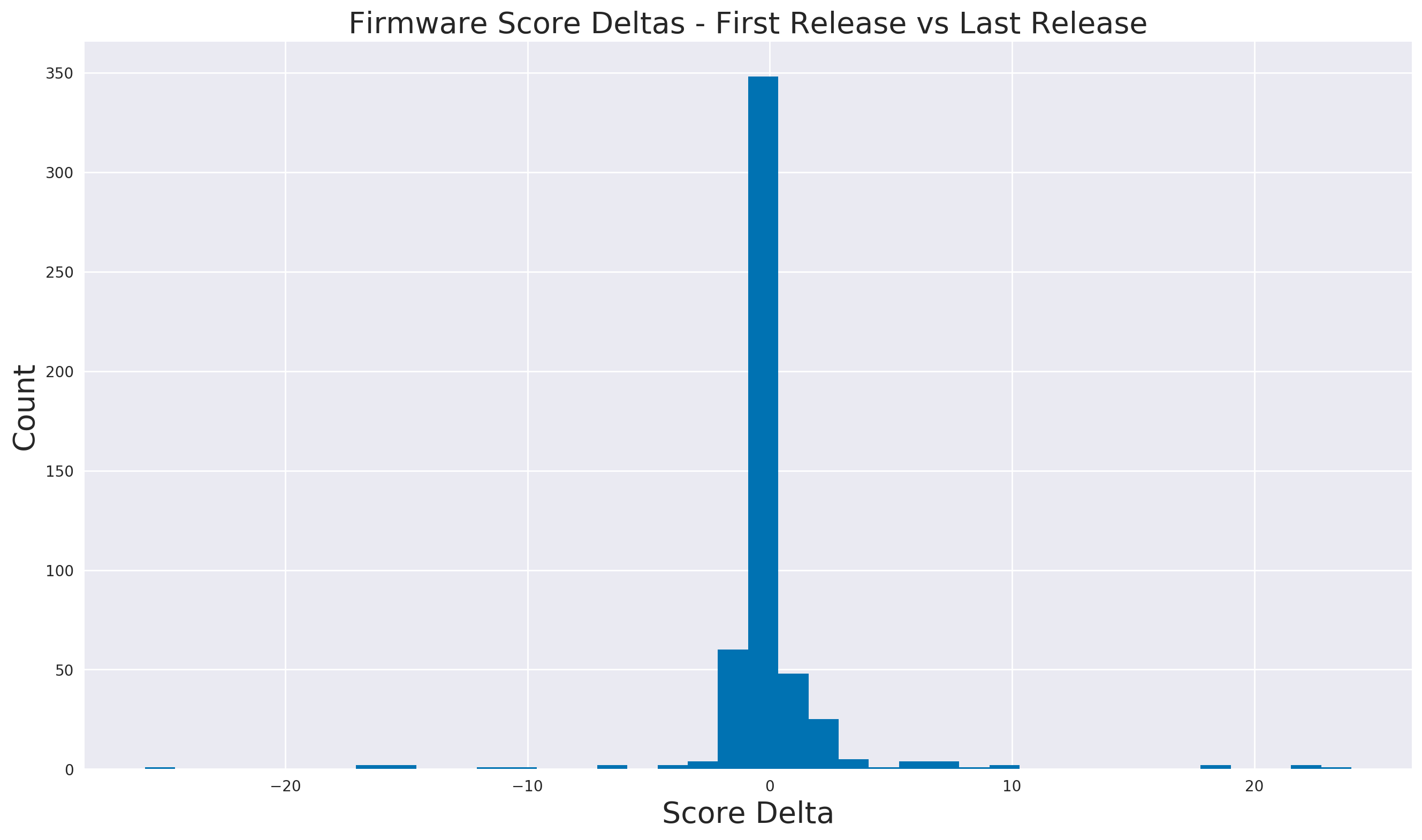 Now consider the histogram’s tails (the regions to the left- and right- of 0). Comparing just the positive changes and negative changes, we found that is was more common for updates to reduce overall hardening than increase it.

Ubiquiti has the dubious distinction of shipping one of the most regressive update in our corpus, affecting the Ubiquiti UAP-HD family of products. 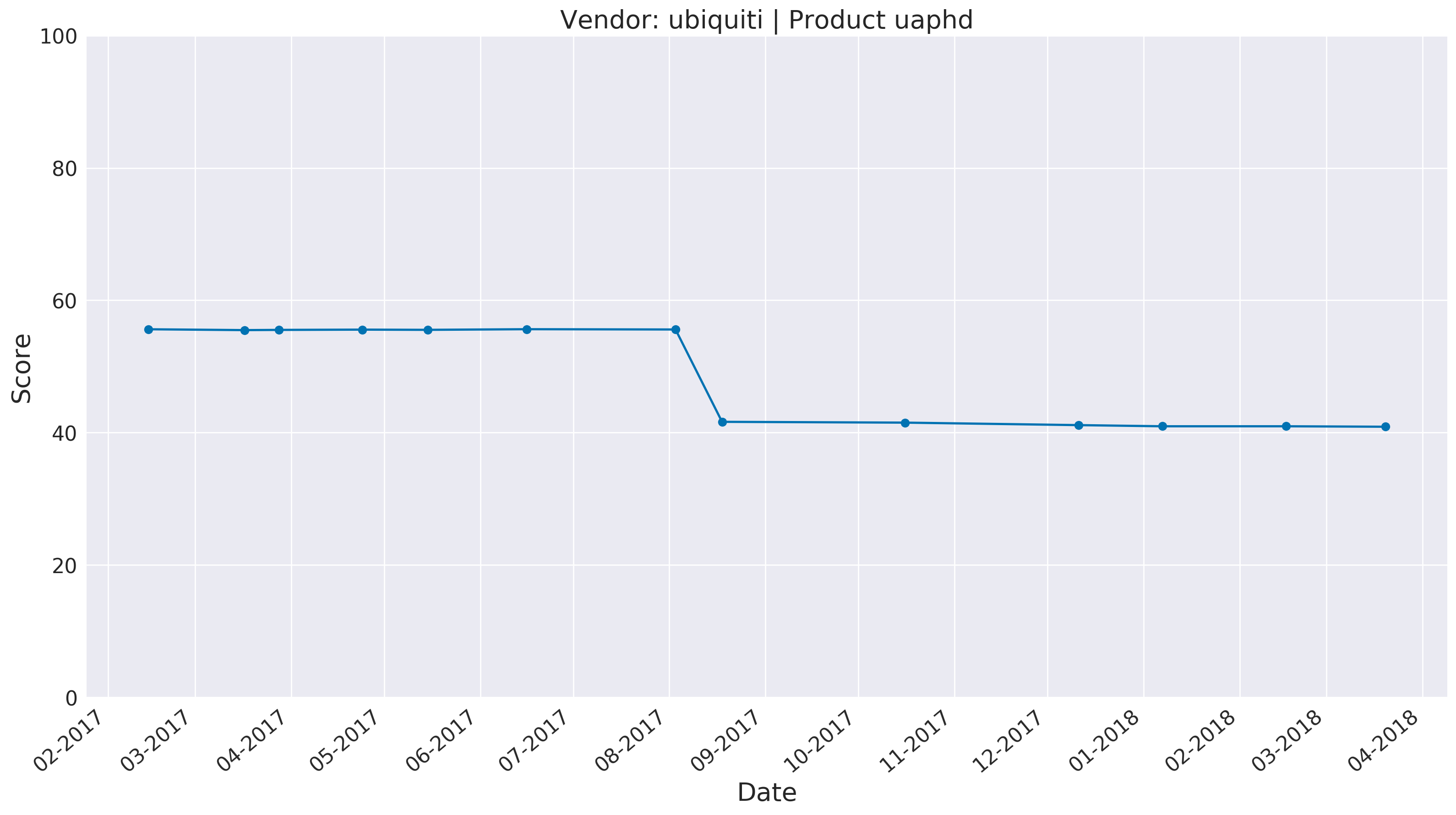 The update released in September of 2017 drastically reduced the overall score of the UAP-HD product line. 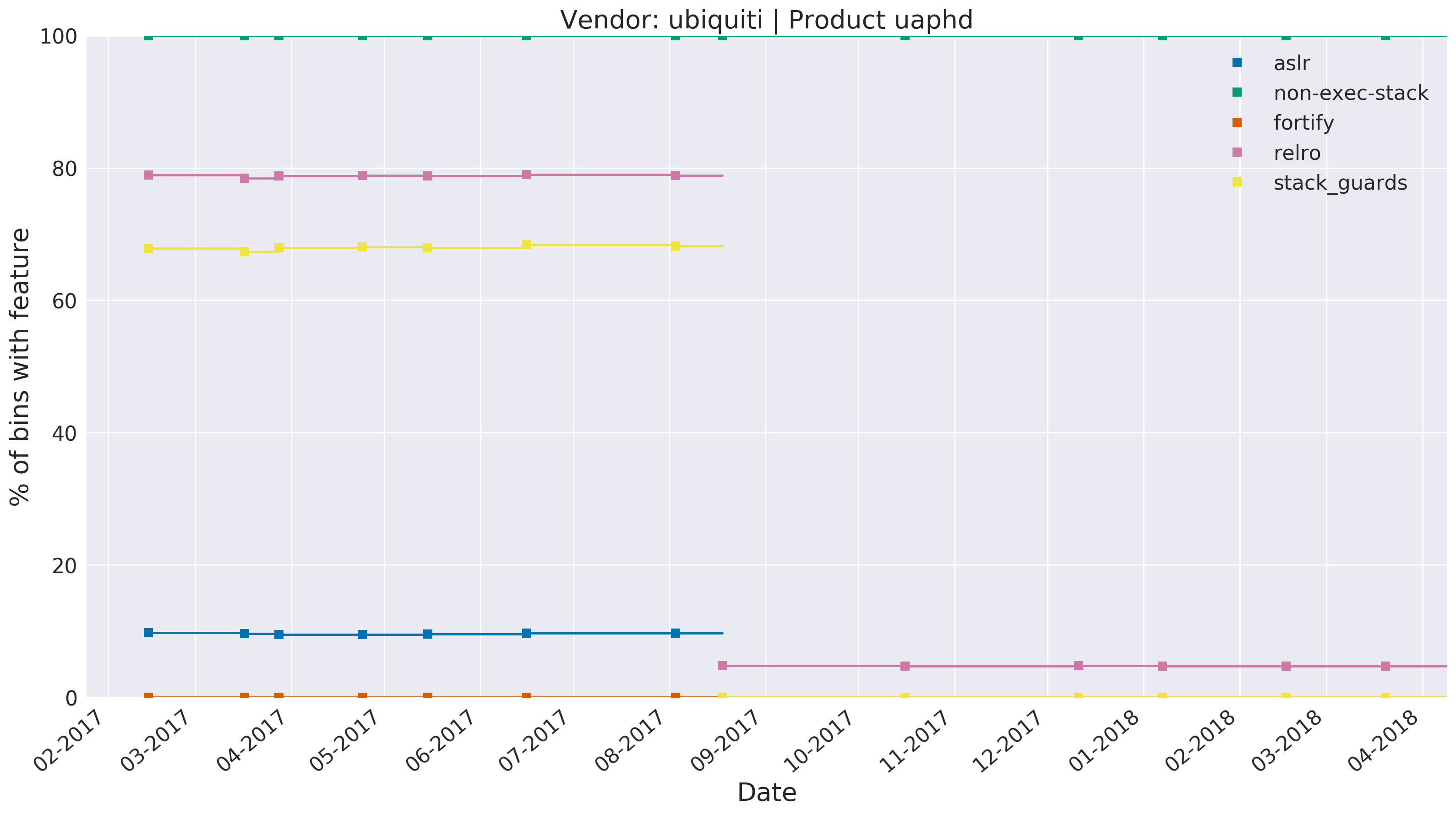 Using this chart we can see that, towards the end of summer 2017, relro dropped from ~80% coverage to below 10%, stack_guards dropped from ~70% to nearly zero, and aslr was completely removed.

At the time of publishing, we do not have data for 2019 builds available. However, the observed trend of removing hardening features shows that Ubiquiti most likely did not have any form of regression testing to validate their builds for binary hardening prior to release.

All Ubiquiti Product’s Scores Over Time 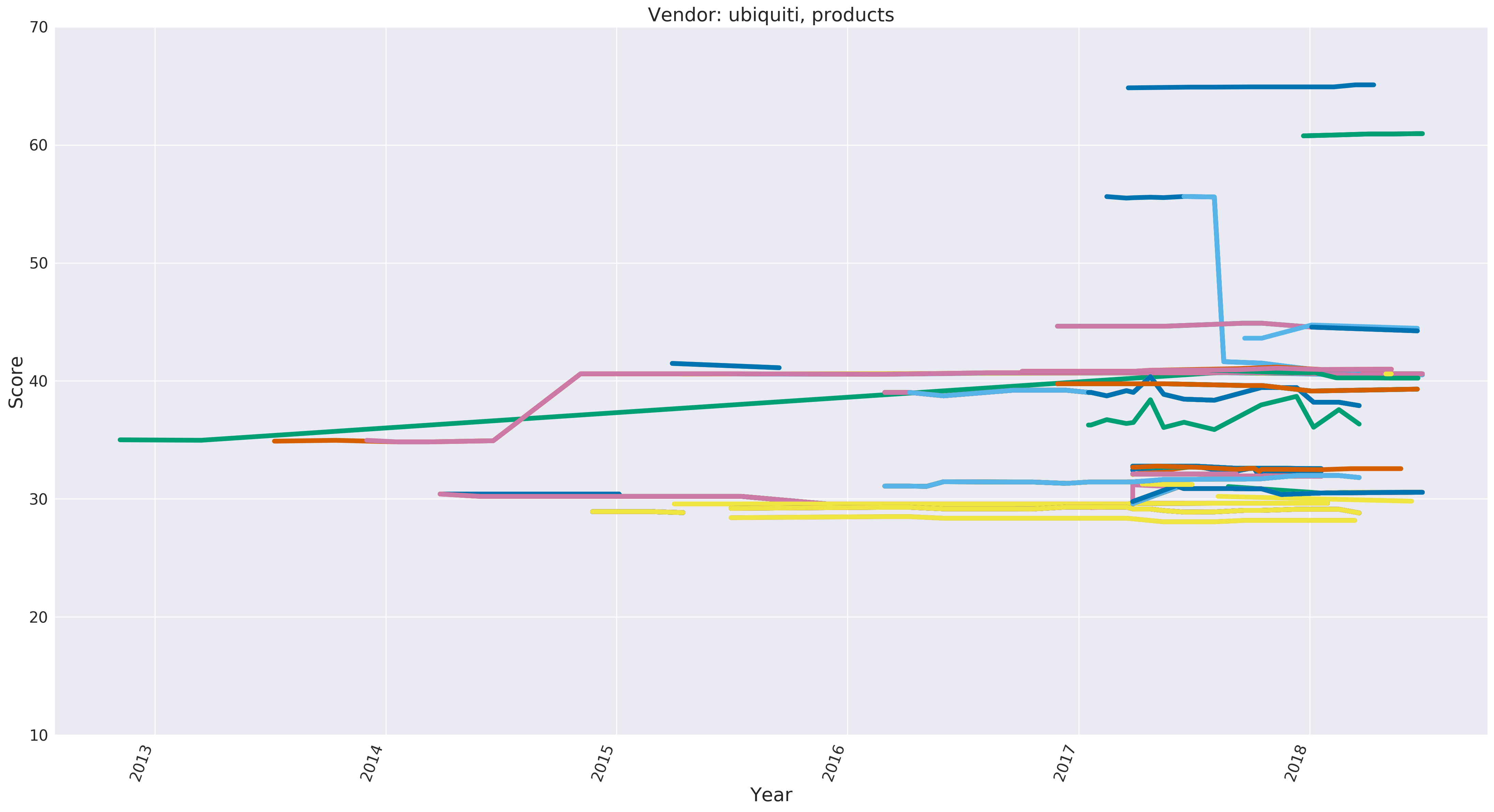 When looking at a time series of all Ubiquiti products we can see a few interesting trends.

Below is a complete list of average (mean) hardening coverage, grouped by vendor. CITL uses radar charts to visualize this because it give a very clear coverage map: the more area covered, the better the binary hardening (on average).

Unfortunately, with few exceptions (notably Synology) we see there is very little coverage, and even Synology struggles to adopt basic hardening features like ASLR and stack guards.

A perfect score, where all binaries had all 5 basic safety features, would result in a chart that looks like a regular pentagon. Instead, in most vendors’ cases, they struggle to achieve polygon status at all.

With the large number of binaries for different vendor firmwares CITL was interested in how common duplicate binaries were between different vendors. We measured this by looking at how often the SHA-256 hash of a binary was found in 2 or more vendors. 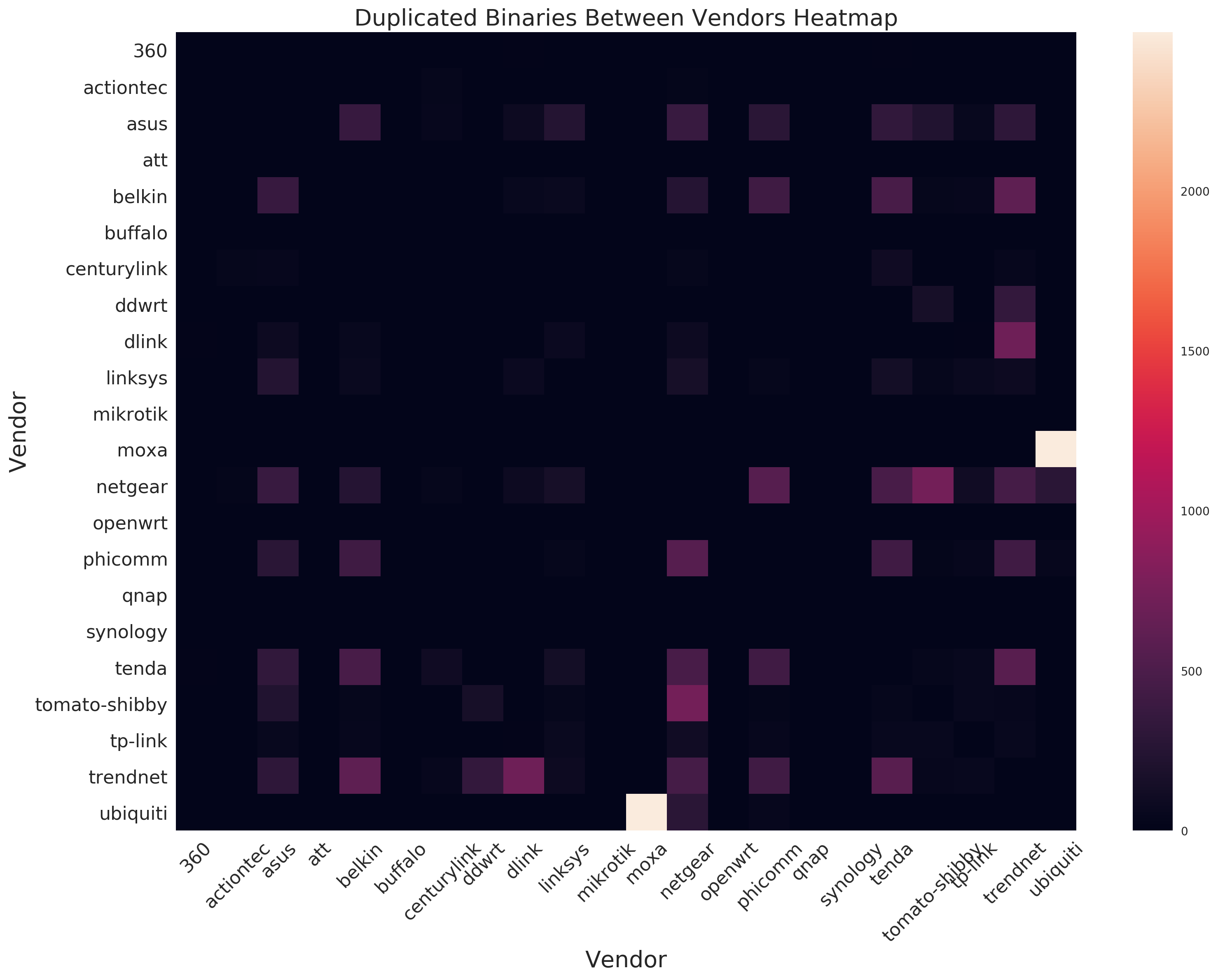 Surprisingly, we found that 3,704 binaries were duplicated between at least two vendors. Some binaries were found in 9 different vendors.

Duplication between products was also very common; some binaries were duplicated between 109 different products.

Why Is This Happening?

When manually exploring some of the binaries, one of the binaries duplicated across the largest number of different products was found to be built by Buildroot, an open source Linux userspace generation framework. We posit that the use of frameworks like this explains the appearance of identical binaries between vendors.

Regardless the cause, the fact that there is a large number of duplicated binaries presents both a problem and a solution.

The problem: these duplicated binaries present a lucrative target for attackers. A vulnerability in one of the more common binaries could be exploited across large number of vendors and products.

The solution: the fact that so many of the products share a common source and/or build system means that improving hardening could have a outsized impact. For example, in the case of Buildroot, adding binary hardening could impact a large portion of the IoT industry.

Our research paints a grim picture of binary hardening in the IoT ecosystem.

Even more concerning is the obvious lack of testing for these features. If a vendor is able to remove most of the exploit mitigation from their product line, it undermines the value of asking customers to apply software updates.

Luckily, we think one of the most important takeaways is that there are low-effort paths that can be taken to improve the situation.

Many of these devices are low cost/high volume. They are given the minimal amount of development time to get a new product out the door. This means that security likely finds itself low on the list of priorities.

In the case of home routers and IoT devices, these devices sit in a location of privilege within the users’ home networks. Regardless of whether or not the device’s owner is an intended target, as “set it and forget it” appliances, these devices are an ideal hiding spot for botnets and other attacker-infrastructure. In short, it is a Good Idea for these devices to be reasonably secure.

Unfortunately, if the trend of minimal hardening does not change, these devices will continue to be a soft target for these types of activity.

That said, we conclude with two points which make us optimistic about the future.

One of CITL’s goals has been to distribute data to researchers and the wider community. Linked below is a CSV of all data we used for this research.

This dataset contains products such as home routers, enterprise equipment, smart cameras, security devices, and more. It represents a wide range of either found in the home, enterprise or government deployments.

Below is a list of columns, their meaning, and possible data types.

Some columns optionally have numpy.NaN values. Hardening features are normally expressed as either an integer or a NaN value.

NaN values occur when the given hardening feature isn’t generally applicable to the binary in question. This can occur, for instance, in the case of ELF libaries (.so files), where the ASLR column is NaN because ELF libraries are always relocatable (and thus there is no way for them to not support ASLR).

We invite anyone with questions to reach out to us online.

« A look at home routers, and a surprising bug in Linux/MIPS